Two cats fighting in downtown London recently had to be broken up by an armed policeman.

Larry the cat, who lives in the office of the British cabinet at 10 Downing Street, and Palmerston the cat, who reigns over the foreign office next door,
do NOT get along. And some are calling upon the government to take responsibility for the cats before one of them gets severely injured.

“An armed policeman pulled them apart and got a huge cut on his hand,” Steve Back, a photographer who has been documenting the feud, told the Telegraph. “I wish someone would do something about it — it’s gone too far.”

Cats are territorial animals for whom first impressions make a big difference. And obviously , arry and Palmerston’s relationship started off on the wrong paw.
“The first impression a new cat makes when he or she meets a resident cat is critical,” Adi Hovav, senior feline behavior counselor at the

ASPCA Adoption Center, told The Dodo. “If two cats display aggression during their first meeting, this may set the mood for their future relationship.”

We asked the experts how to introduce multiple cats so that they don’t end up hating each other. Here’s what they said.

Check in with the vet.

Before introducing cats, make sure they are healthy.

“Many cats come home with upper respiratory infections when adopted and should be separated in a bathroom for a few days as to not get other cats in the household sick as well,” Dr. Robert Proietto, a veterinarian in New York City, told The Dodo. “It is also important to get a vet to examine the cats and to know that your new cat is FELV [feline leukemia virus] and FIV [feline immunodeficiency virus] negative before introduction.”

It is always a good idea to keep cats separated when introducing them to each other, Hovav said. If your living space is small, putting even a bathroom door in between them could prevent cat fights in the future.

“During this period, the cats often smell each other underneath the door and this starts a slow acclimation process,” Proietto said.

Look for signs of stress.

You’ve let your cats sniff each other through the crack at the bottom of the door. But you want to be able to go to the bathroom — not play bodyguard. That’s understandable.

The good news is that if cats aren’t showing signs of stress, they can try out some face time. “Two cats are ready to be introduced as long as neither is showing any signs of stress or exhibiting any aggressive behavior, like hissing, growling or swatting,” Hovav said. “Signs of stress include poor appetite, inappropriate urination or defecation or excessive hiding.”

As long as neither cat is exhibiting any of these behaviors, they can be introduced through a slightly cracked door. If that goes well, they may be ready to meet without a barrier between them.

If one cat becomes aggressive, do not try to calm or soothe them, Hovav advised. “Give them some space and keep them separated from the other cat.” It varies how long your cat might need in order to get acclimated to another feline. But once they spend one continuous day around each other, they’re probably OK to be left alone together.

“Cats may need more or less time before they can be left alone together — much depends on the individual cats and the environment,” Hovav said. But one thing you absolutely should NOT do is force the issue — then you might have a Larry-Palmerston situation on your hands.

Do not punish a cat for reacting negatively to another cat.”

The cats in my house, frankly, had a less-than-perfect introduction when my boyfriend and I moved in together. The frenzy of the move resulted in the cats being let loose almost immediately.
But we watched them closely.

Brioche hid for a bit, while

Fyodor sniffed around the new territory. And when we saw Fyodor ecstatically rolling around in Brioche’s cat bed and purring, we knew it was the beginning of a beautiful friendship. 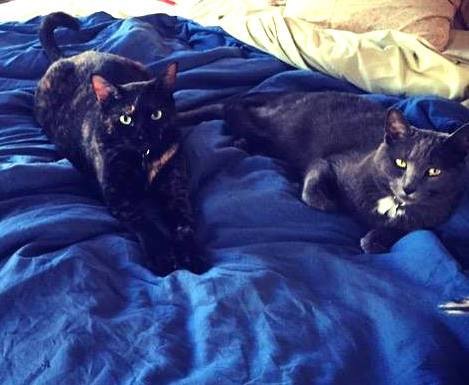 If you’re ready to add a loving and furry family member to your home, visit